SWMS Alumnus Rowan Hibbard recently performed on “The Voice.”  Rowan’s fans watched together from Naasz Gymnasium at Central High School to cheer for her on Monday, October 10.  Rowan earned a three-chair turn for her performance in the competition series and chose Gwen Stafani as her coach.  Rowan has been singing since she was five, is a trained dancer, and has also been involved in musical theater.  Rowan’s first single, “How I Want It,” was released and 2019 and she has since released three other singles.  Her single “Paradise” generated support for a memorial fund in honor of Rowan’s classmate who passed away from cancer at the age of 14.  Her music streams on YouTube, Spotify, Deezer, and Amazon Music.   During a recent stop at Southwest Middle School, Rowan offered a group of learners the following advice:  “Pursue your dreams.  Set goals and be willing to work hard to achieve them.”

Rowan, Southwest Middle School wishes you the very best as you pursue your dreams in music. 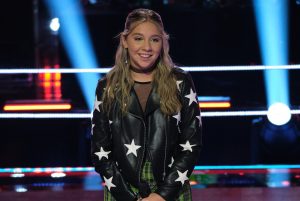